Who is El Sastre? Sastre is the Spanish word for tailor. El Sastre was also a person. He was a rare and stoic individual. I have met very few people in my life that compare to this man. He commanded an enormous presence yet spoke so few words. He was a revered and respected old world gentleman whose presence was more "felt" than seen or heard. His advice was crpytic, firm and clearly enlightened.

Oscar Turriate was a man who could have lived a very different life. Born in the small town of Cabana, Peru, he elevated his station in life and became a prominent businessman in the capital city of Lima. There, he operated an reknowed hotel and entertained first class guests from around the world. He became a pillar of the community and was well respected by everyone who knew him.

Rather than stay for the sake of business, he followed his family to the United States and helped them plant new roots. Stripped of his status and now later in life, he took up the humble vocation of a tailor which he stayed for the rest of his career. He was unusually skilled and and rapidly aquired respectable clientele. Though this was not his intended career, he was grateful his father had trained him in it at a young age. He learned to love his craft and lived for it. He enabled a better life for his family and is largely responsible for their thriving here.

Objectively, I have never met someone whom I respect so sincerely. Such a man could have done anything and succeeded in the highest tiers of society. Instead, he remained humble and largely unsung for the rest of his life. This is the meaning behind the name El Sastre. This page is a small tribute to him, a truly rare human being who elevated his family instead of himself. He is celebrated by all who knew and loved him. 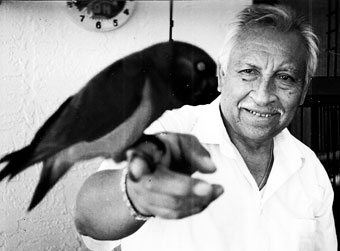